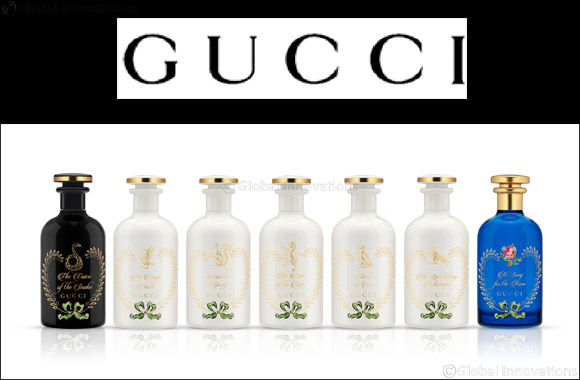 October 28, 2019:    “The idea that some primary scents of perfumery, like the essences of the flowers, the green scent of some plants could be joined to atmospheres, linked to memories. And also link to the idea that a perfume in an alchemical way can through a scent bring you back to a different place, through a sense so strong and so important for every human being,” Gucci Creative Director Alessandro Michele.

Wrapped up in a place, a person, and a moment, scent tethers itself inextricably to emotion. Fragrance is the score to experiences that solder to memories and to the unconscious. To transform this ideology in perfume, Alessandro Michele imagined an alchemic laboratory. Inside, seemingly different elements are selected, analyzed and fused. The antique study of essences found in nature are studied to recreate a feeling and a time in which the power of imagination forces the inertia of reality.

Gucci fragrances opens a new story of magic and imagination in Luxury Collection: The Alchemist’s Garden.

Inspired by the science of alchemy, Alessandro Michele reimagines the path of transformation from lead into gold with the art of fragrance making to create seven eaux de parfum, four oils, three acque profumate and a candle. Alberto Morillas worked with Alessandro Michele’s vision on a collection using pure natural plants and flowers layered with modern molecules. Blended through rediscovery, a hero ingredient is magnified for each scent: Oud, Amber, Violet, Iris, Mimosa, Rose
and Woods. Every fragrance and every formula is created as an unicum, telling the story of a place, a moment, a season, and a smell of memory.

The singular scents in the eaux de parfum, acque profumate and oils then become customizable and transformative when layered in a multitude of combinations to construct a special sillage—the amount the perfume lingers in the air when it is worn.

“The oils and acque profumate create individual statements. Personalize your beloved scent with an oil or a floral water to build a unique sillage. Each oil or floral water of the collection can be layered with each eau de parfum. Just play with the scent to find your favorite, as an alchemist would work to find the gold formula,” Alberto Morillas.

“When I started working with Alberto, our reference points were the archaeology of scents and perfumes. We began with the violet, and from essences that came from the world of flowers, because the smell of a flower, the smell of something that belongs to nature, evokes something very powerful, which belongs to something that lies far away in our memories. We imagined returning home from the summer. What is the smell when it starts raining in the city? It was fun to work like old perfumery experts, with scents and essences like alchemy, and to tell the story of atmospheres, spells, almost the idea that smelling or having that perfume transports to a time, which sometimes is a struggle to remember but it is a smell immediately leads to life experience,” Alessandro Michele.

A Song for the Rose: Rose

The scent’s name connects to its notes as an expression of absolute femininity. Rose is presented in the fragrance as the eternal queen, embodying in alchemy the regeneration of separated essences and their resurrection on a new level. The rose is blended to an olfactive duality and melody with sweet Musk and strong Woods notes.

The Voice of the Snake: Oud

Named for a snake’s movement through a forest, the scent is mixed around the note of precious and mysterious oud. Symbolic of eternity, oud is highly prized for its singular, aphrodisiac and sensual aroma. Laying in the dried Patchouli leaves on the ground, the snake hides. Leather-like scales slowly draw traces on the snake’s path, tinted with Saffron shades. The snake glides through Oud wood rays. Intensive and deep, the scent is as hypnotizing as the sound of the snake’s voice.

The Eyes of The Tiger: Amber

In China, amber is considered the “soul of the tiger”, which enters the earth and then becomes a stone. An imagined journey into the soul of the tiger. Benzoin and Tonka convey a tiger’s gaze with a dark hint of Vanilla. The scent is rounded out with woody and sweet Ciste resin, representing a tiger’s contrasting sides; dangerous and sensitive, fast and patient.

Violet is considered the flower of modesty because it hides its flowers in heart-shaped leaves. To blend The Virgin Violet scent,

a swan is imagined. Covered in soft white feathers, the delicate swan, pure and graceful, is translated in a composition of Musk, Violet leaves and Iris petals. Its purity is nuanced with a deep character, shown when the swan spreads its wings, to reveal a bold Vanilla.

The Last Day of Summer: Woods

Cross the lands and feel the breeze of a forest in the early Autumn. While walking in the Cedarwoods and the Cypress forest, see the first leaves fall and listen to the crunch of steps passing over, releasing Nutmeg and powerful woody and earthy notes given by Patchouli and Vetiver. In this temple of silence, a pheasant with magnificent feathers is imagined flying across the trees and disappearing above the canopy.

The Last Day of Summer is inspired by Alessandro Michele’s clear vision of a particular moment when walking in a forest in early Autumn. The nostalgic feeling at the end of summer coincides with the season change, a symbol of the renewal of life and nature.

An interpretation of the precious and royal Iris flower, which symbolizes wisdom and courage. Iris is one of the most ancient ingredients in perfumery, also frequently used in the make-up industry. For the scent Tears of Iris, a noble owl is pictured in a Sandalwood forest on a night with inky blue skies. Adding depth and sensuality to the scent are notes of Angelica Seeds and Musks. The owl watches the forest with its large luminous eyes, which shine in the dark to recall an Iris.

Mimosa brings optimism and joy at the end of winter. Bright powdery blossom pompons, the flowers are the first sign of spring.

The scent’s immediate rush of energy and light is captured with Pepper and Musk to convey instant brightness.

“It is a kind of bathroom that belongs to the imagination, where strange objects are kept, and someone obsessed with smells and fragrances. The images are evocative of a suspended time, which is then what makes you experience a scent, to bring you back to an imaginary place,” Alessandro Michele.

A setting so rich it paints the nuances of the character who inhabits it. Eccentric with a penchant for beautiful things, a collector’s marble bathroom is filled with ornaments, figurines, collectible art and ceramics of miniature animals, a Venetian fortepiano, astrological and astronomical devices and gadgets, and live tropical parrots. Shot by Colin Dodgson, the campaign’s point of view is placed amongst the opulence and abundance, the perfume bottles, oils and candles from Luxury Collection: The Alchemist’s Garden.

Ideated into covetable objects for those who curate the aesthetic of their private world, that contain something precious and magical. The design of the bottles is inspired by the bottles found on wooden shelves of a vintage apothecary, curious pharmacy jars and the first perfumery containers. Gold lettering, decoration and animal symbols appear on the seven eaux de parfum contained in lacquered glass bottles with stoppers. All of the scent flacons are white except for The Voice of the Snake which is black, and A Song for the Rose—in a shade of blue chosen by Alessandro Michele. The blue bottle recalls one he saw in his mother’s bathroom, that was filled with the essence of roses.

“It was a beautiful scent, an enveloping, reassuring perfume that today also brings me back to an idea of beauty, which is that the flower of this scent creates beauty,” Alessandro Michele.

The three acque profumate are in a specially designed white lacquered glass bottles decorated with Gucci’s feminine and whimsical pink rose print. The four oils are in sage green toned lacquered glass bottles and reveal a touche oreille, a glass pipette style applicator. A candle imbued with the scent of The Virgin Violet is in an ornate white porcelain jar, richly decorated with real gold.

The flourishes from the designs embellishing the bottles also appear printed in gold on the outside of the boxes.